You Will Never Be Without Friends, If You Know How to Make Pie 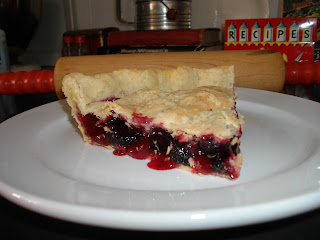 Last week my youngest was home on his spring break from college.  Much of my desperation and bravery of flying through a snow storm to get home last Monday, was because I wanted to get home to see him.  I have missed my youngest so much since he left the nest, so anytime that he is around...I do not want to miss!
Probably for him, the joy of having me around and 'our time together' would be more about the things that I do when I am here....things like laundry and cooking!  I laughed once when he came home and I had been out of town for some reason or another.  He said, "There is no reason to come home if Mom isn't around...because there isn't a thing to eat"!  I hope he loves me for more reasons than my cooking (which I am sure that he does).  :D
I have often worried about his survival skills while he is away at college.  They say that if a child gets hungry enough, they will eat.  I hope that is true for Zach, but another fear that comes to mind is...what he will choose to eat!
Since being away at college, he now often complains of stomach troubles and because of that, is less likely to eat.  We have decided that the food served in their dining halls leaves a lot to be desired...and as the boys say, "It runs right through you".  Bummer!  If I could, I would set up a little diner for those poor kids who are missing their mother's home cooking...Mom's Diner.  I'm sure Mom's Diner would be a smash hit on campuses around the world!

Momma Nutrition sent Zach back to campus last weekend with a couple of supplements and vitamins that I am hoping will give him a boost.  When we were unpacking in his dorm room, he looked at the pills and said, "I hope my RA doesn't see these!"  Crazy thought that my kid might get 'busted' for having vitamins in his room!
I knew I wanted to prepare a nice lunch for him before we made the drive back to Athens last Sunday.  I got up early, started that last minute load of laundry for him and headed to the kitchen.  One thing that Zachary always loved was the pies that I often made.  Fruit pies to be exact.  Saturday night I sat out some blackberries to thaw; blackberries that I had picked the summer before.  I set about making some gentle revisions to his  favorite pie crust recipe; hoping for a version that would still be delish, however a little more healthy.  Zach is the child that will follow you around with a piece a pie and when seeing that you aren't going to eat the crust...nabs it!  The crust is almost his favorite part.  So playing with this cherished recipe, I knew was like skating on thin ice.
With a few alterations to the recipe and with my fingers crossed, I sat a generous slice of the pie in front of Zach.  I mumbled that I had changed a few ingredients, "so let me know what you think".  I headed back to the kitchen to clean up the dishes so that we could soon start the journey back to campus.  Later when I was upstairs gathering some of his things, I yelled down the stairs...."So what did you think of the pie?"  To which he responded, "Delicious!".  Music to my ears!
I wrapped up the rest of the pie and tucked it in the car with all of his other things.  Again and again I will say, eating healthy does not have to be a bad thing.  (Everything in moderation of course.)  If we leave pie as a special 'every now and then' kind of treat, it still remains a cherished treat.  By changing up some of the ingredients a bit, I feel even better!
Over the years, I have collected recipes in a little spiral notebook titled, Family Favorites.  This recipe was titled, My Favorite Pie Crust.  I shall have to add a new page and call it, A Healthier Version of My Favorite Pie Crust!  Often you will see this recipe in cookbooks, titled No Fail Pie Crust.  It is a winning recipe for those of us who might have been intimidated to tackle a crust.  You will never be without friends if you know how to make a good pie!

A Healthier Version of My Favorite Pie Crust; Zach Approved!

With a pastry blender, cut in:
3/4 cup solid coconut oil

(Solid coconut oil looks very much like the Crisco that we have used for years...and Crisco is an imposter; aka a hydrogenated oil. Your body treats hydrogenated and partially hydrogenated oils like foreign bodies, using white blood cells to "attack" and "destroy".)