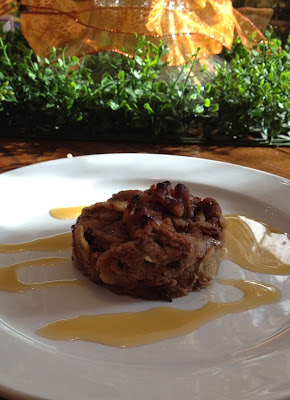 Written for The River Current Publication


There are so many delightful things that we can make with apples…apple pies, cobblers and crisps, applesauce, apple cider, apple dumplings, apple cake, apple butter, caramel apples…the list goes on and on.  I even washed some up, sliced them real thin, submerged them in a simple syrup solution, sprinkled with cinnamon and then left them do their thing in my dehydrator for about 8 hours.  I shared some with my father and sent some to Zach at OU.  Both have contacted me since and requested that I please do that again!
Not only are these shiny fruits delicious to eat; but they are also a powerhouse of polyphenols, a potent antioxidant.   The antioxidants that apples contain, have a few different positive effects on your brain.  For example, apples have been shown to fight against Alzheimer’s and Parkinson’s disease. It seems these antioxidants have free radical fighting effects, which helps to keep dopamine from breaking down…which is commonly the case of Parkinson’s.
The soluble fiber found in apples also does amazing things for the body. Soluble fiber is linked to decreasing your risk of diabetes, by helping control swings in blood sugar levels.
Soluble fiber also lowers cholesterol. Lower cholesterol means lower chances of heart attack. It also means no gallstones. Lower cholesterol effects many systems of the body and can help you feel better in general and improve overall health.
A recent study at the Ohio State University, showed that adults eating just one apple a day over a four week period of time reduced their levels of LDL (“bad”) cholesterol by as much as 40 percent!
Not only does lower cholesterol decrease your chances of heart attack but the apple contains other properties that help your heart stay healthy as well. The skin of your apple contains a phenolic compound that prevents cholesterol from sticking to your artery walls and solidifying.
Scientist from the American Association for Cancer Research, agree that the consumption of flavonol-rich apples could help reduce the risk of developing pancreatic cancer up to 23 percent.  Researchers at Cornell University have identified several components in apple peel that have potent anti-growth activity against cancer cells in the liver, colon and breast.  As they say…an ounce of prevention is worth a pound of cure.
There are typically around 95 calories in a medium sized apple; you get credit for eating almost half of your daily fruit intake necessary in a healthy diet. You also get a giant dose of vitamin C, and the amazing soluble fiber. This little fruit is jam packed!  An apple a day just might keep the doctor away!
My mother’s mother used to own a restaurant in Columbus.  Bread puddings were often on her menu so that she could make use of the stale breads and doughnuts that she had on hand.  This silky version is made with apple cider in place of the usual custard; giving it a double hit of apple flavor...I'm a nut about presentation, so I drizzled mine with some REAL maple syrup for that special finishing touch.  Yum!
Spiced Apple Bread Pudding
2 medium sized tart organic apples, such as Granny Smith, Empire or Cortland
2 Tbsp. brown sugar
1 tsp. ground cinnamon
½ tsp. nutmeg
3 cups apple cider
2 Tbsp. butter, melted
1 tsp. maple extract
10 cups (1- inch pieces) stale bread
1/3 cup raisins
½ cup walnuts
Directions:
1. Peel and thinly slice apples.  Toss with brown sugar, cinnamon and nutmeg in a medium sized bowl.
2. Combine cider, butter and vanilla in another bowl.
3. Cover the bottom of a 2-quart casserole dish with half of the bread pieces.  Sprinkle with 1/2 of the raisins, apples and walnuts.  Add another layer with the remaining ingredients.
4. Slowly pour the cider mixture over the top layer.  Using a flat, wide spatula, pressing down to compact and submerge the top layer.
5. Allow to sit for approx. 15 minutes, so the juices become nicely absorbed.
6. Cover with foil and bake at 350 degrees for 50 minutes.  Uncover and bake an additional 15 minutes or until the top is golden brown. 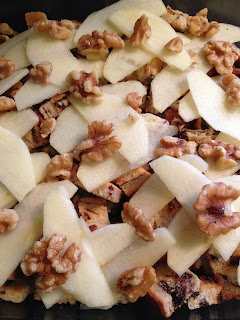