Back to the Kitchen

Written for The River Current Publication on Monday, May 13, 2013 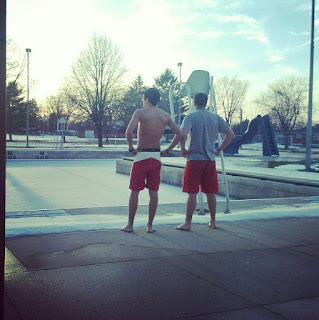 Today was my son’s first day of work at the swimming pool.  Being a lifeguard, they start work a couple of weeks early, in preparation of getting everything cleaned and polished before opening day.  I chuckled when he came downstairs in a pair of long johns this morning.  Lol…you’ve gotta love Ohio weather.

It looks like since Zach is now home from college, it is time for this gal to head back to the kitchen.  One day last week we had shared a late lunch together; a late lunch for me often meaning a light snack later in the evening is all that I will need.  It appears Zach’s stomach doesn’t agree with my plan.

I discovered this later that night, when he wondered into the room where I was studying and said, “Aren’t you hungry yet?”  Hmmm…I guess I hadn’t really thought about it.   Darn, it was already 9 p.m. and when I told him I would be happy with an apple and some peanut butter he said, “That’s what I was afraid of…I’m starving”.
So before I knew it, I was outside firing up the grill and preparing to throw on some hamburgers.  The thought of grilling burgers at 10 p.m. would have been unheard of, when I was home by myself.   At this point, all I could hope was that the neighbors would not notice our unusual eating routine!
Who would have known that Zach and I were going to need a little re-adjustment period to get us back in the groove of cohabitating again?  He was still on campus time…which means sleeping only occurs when absolutely necessary and eating can occur at any random hour.
My saving hope was that once he started his summer job that some things would return to a more normal routine.  This morning is proof that my hopes have been fulfilled.  Much to my surprise (and joy) he was heading to bed earlier than me last night and this morning found him up and rolling at 7:00 a.m.  As a mother we learn with a little patience, most things have a way of working themselves out.  The least I can do for him is to head to the kitchen and have a nice meal ready when he gets home today after a hard day’s work!
This is a great go-to recipe from my fav, Martha Stewart.  It is quick and easy.  Once you get everything prepped and in the oven, dinner essentially will take care of itself.  Good thing…because this gals heading back to the books!

Directions:
Preheat oven to 450 degrees. Season chicken inside and out with salt and pepper and place in a roasting pan. Place the herbs in the cavity. In a large bowl, toss leeks, carrots, and potatoes with oil; season with salt and pepper. Scatter vegetables around chicken, arranging potatoes at edges of pan; pour wine into pan. Roast until chicken is golden brown and juices run clear when pierced between breast and leg (an instant-read thermometer inserted in thickest part of a thigh, avoiding bone, should read 165 degrees), about 1 hour.