The Light At The End Of The Tunnel

July 23, 2013
I had the pleasure of spending last weekend in the hills of Southern Ohio with my son and some of his OU college buddies.  I rented a cabin nestled in the middle of the Zaleski Forest, loaded up some coolers and off we launched for a weekend adventure in the woods!
One might wonder what the hell I was thinking...but hey, I'm that Mom who goes that extra mile for her kiddos.  It was something that Zach wanted to do, so it was my birthday gift to him this year.
Because the boys were busy 'doing their thing', I had a whole lot of time on my hands.  To be honest, initially I struggled a bit.  There was no Internet connection and limited (if any) cell phone reception.  Eeek.  What's a girl to do?  I hiked a bit.  Read a lot and cooked for the kids when they were hungry...which was rather often!
The area was absolutely beautiful.  Peaceful.  Serene.  I would highly recommend a get away like this to anyone.  After a bit of adjustment, I surrendered to a world without electronics.  As a friend suggested...detach and live in the moment.
We are all so married to schedules that are bursting.  The ever constant connection to the world via our cell phones and/or laptops.  I chuckled as one friend shared, "Camping?  To me camping is staying in a three star hotel rather than a four."  I love it.  How did we all get so spoiled and when did we forget how to relax.  It was a great opportunity to refresh, refocus and reconnect with myself.
At my insistence, late Sunday night we made the trek through the forested hills of Vinton County to the Moonville Tunnel.  The boys weren't so thrilled and I knew they were doing it just to oblige me.  I had read a little bit about it and I was looking forward to checking it out.
Rumor has it, that the tunnel is haunted.  It is said to be one of the most legendary railroad tunnels in the world.  The craziest part is the journey to the tunnel.  You travel down a curvy desolate road, park your car and begin the hike through the woods and up the hill.  There in the middle of nowhere sits this amazing large structure.  As we brave hikers approached the tunnel, my son quietly said, "We are about to enter Narnia."  lol  It just seemed so comical and almost believable that we were about to enter a portal to another world. 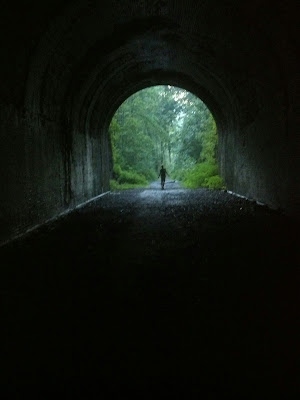 My son snapped the photo of me above.  To me it somehow represents the crazy journey that I have been on this last year and a half.  I have continued to push myself forward; not always knowing which direction I am heading, but always searching for the light at the other end.  Somehow in a weird sort of way, our trip to the tunnel was cleansing; empowering.  I am slowly coming out the other side.
﻿