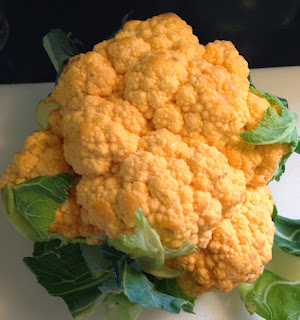 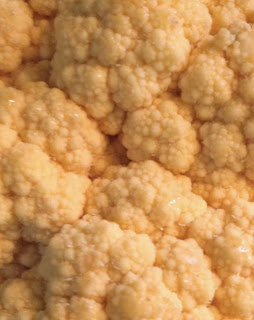 It is interesting how the popularity of some foods will come and go.  Not so long ago, Brussels sprouts were all the rage…roasted, or thinly shaved into salads.  Prior to these new presentations, I admittedly was never a big fan of these small (sometimes stinky) orbs.
Well apparently, there is a newcomer to the world of re-invented foods…cauliflower.  Cauliflower just might be the new Brussels sprout.  Cauliflower perhaps is a bit more visibly appealing than a Brussels sprout; but besides the eye appeal, cauliflower also has some appealing nutritional benefits to be considered….it is low in fats and carbs and high in vitamin C.  It can be eaten raw, grated, steamed, roasted or mashed.
While at the grocery last week, I was tempted by a display of beautiful orange cauliflowers.  I couldn’t resist.  Orange cauliflower has higher than normal levels of beta carotene…25 times the concentrations of beta carotene found in white cauliflower.  (Beta carotene is a form of vitamin A that encourages healthy skin.)
After further researching the orange cauliflower a bit, I was pleased to learn that these colorful cauliflowers were not the result of genetic engineering, but rather came after decades of traditional selective breeding.
Another cool thing about these orange beauties is that they retain their color, even after cooking.  What better time of year to head to the kitchen and see what orange goodness I could stir up for my family!
This is a recipe that I warmly remember my sister-in-law; Nancy Crago, sharing with me.  I had stopped in for a visit on a chilly afternoon and she had a large pot of this creamy soup simmering on the stove.  She said it was one of her favorite comfort foods.  I made sure to get the recipe and have it in my recipe file as, Aunt Nancy's Creamy Cauliflower Soup.
Sadly, we lost Nancy to cancer a few years ago#cancersucks. I know that she would have thought the addition of this vibrant orange cauliflower to her favorite soup, would have been just as delightful as I did!


1. Melt butter in large pot over medium heat.  Sauté onions, celery and carrot in butter until tender; approx. 5 minutes.  Sprinkle the veggies with flour and stir until combined. 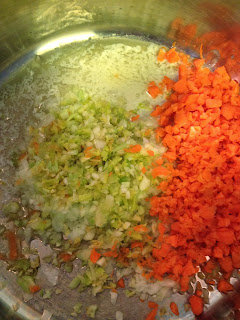 2. Slowly pour in the chicken broth; stirring the entire time.  (This will give the soup its creamy texture.)
3. Stir in the cauliflower, bay leaves and tarragon; bring to a boil.  Reduce heat and allow to simmer for 30 minutes to an hour.
4. Once the cauliflower is tender, remove from heat.  Carefully pour the mixture into a blender and puree until smooth.
5. Return the mixture to the soup pot.  Add the milk and ½ and ½.  Cook over medium-low heat until the soup is hot. Taste and add salt and pepper to taste.