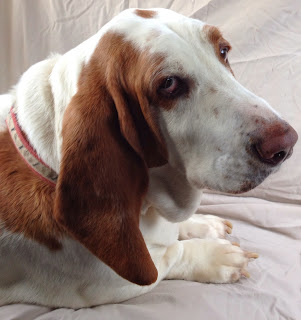 I took this picture the other day.  I thought it was adorable and for some silly reason wanted to share it with you!  This is my stinky friend and companion, Bentley the basset.
Sharing Bentley with you doesn't actually have any thing to do with nutrition, health or wellness.  Actually, Bentley is overweight...at least that's what everyone tells me.  Isn't it funny, that when we are constantly around something, that we just don't notice things that others instantly see on the occasional visit.  My oldest son just shakes his head at me when he sees our Bentley.
Bentley is a mild, loving sort who doesn't ask for much...just his favorite hammie snacks that I keep under the kitchen sink.  For some absurd reason, I have always wanted a basset.  I think it comes from those days long ago when we would all gather around the T.V. and watch the silly program...Hee Haw.  (Now that dates me!)  Anyway, on the show they always had a lazy basset hound laying on the back porch.  I wanted that.
When Bentley was a puppy he was a terror.  At one point, I was even near surrender...desperately asking around to see if anyone would be interested in taking him.  He ate every shoe he met, sheds fiercely and stinks...even after a bath.
When they were growing up, I always preached to my children...once you make a commitment to something, you have to stick with it.  I was the one who had invited this poor mutt to join our family, so who was I to consider surrender!
The rest is history.  Five years later and my children are gone.  My nest is empty.  And who do I have to keep me company...this loving walrus-shaped dog named Bentley.  Thank God for commitment. 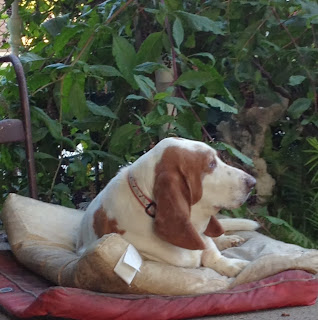